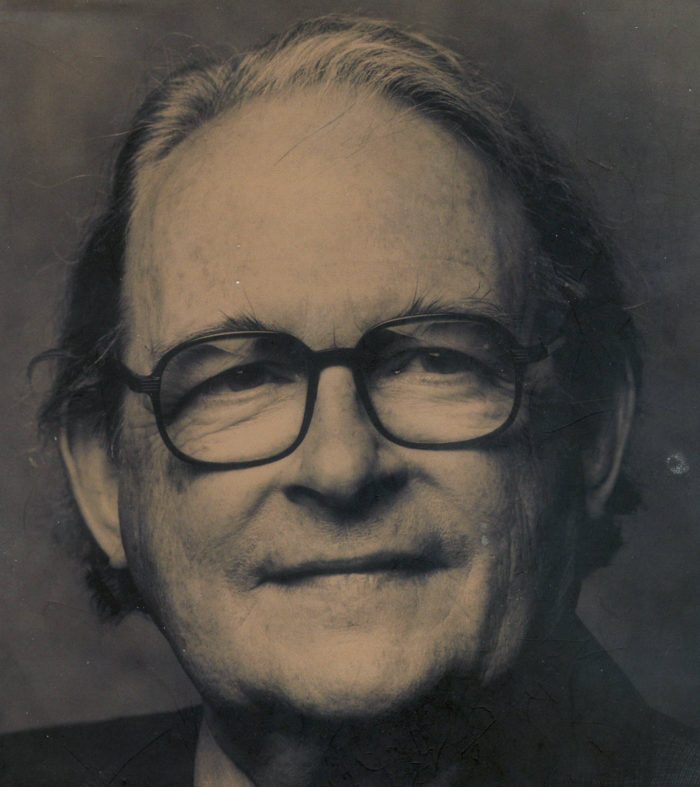 Svein Ørnulf Ellingsen, Norwegian hymn writer and artist, died on Palm Sunday, 5 April 2020. He was born on 13 July 1929 in Kongsberg, Norway, the son of master stonemason Fritz Frølich Ellingsen and Karo Enge. He was raised in Kongsberg; from an early age he was drawn towards a career in the arts. Initially intending to study theology, Ellingsen instead studied at the Art and craft school in Oslo (Kunst- og håndverkskolen) from 1950-1951 and the National art academy (Statens kunstakademi) from 1952-1955, with additional study in 1966-1967 in craftwork and design at the National teachers’ academy (Statens lærerakademi). Ellingsen married Ingegjerd Kallhovd in 1962; together they had three children, Margrethe (1963-1969), Ingvild (1966-) and Eystein (1971-). As a painter, Ellingsen exhibited in several solo and collective exhibitions. His style is characterised by small formats, with sensitive treatments of the motif. He remained an active artist throughout his life, often decorating hymn texts with thematically embellished calligraphy. Ellingsen role in renewing and invigorating the language of the hymn is one will primarily be remembered as a hymnologist and hymn writer.

From 1957 to 1966 Ellingsen held a number of positions as a reviewer and contributor to various church journals and newspapers including Vår kirke, Vårt Land and as an editor for Schibsted forlag. His primary occupation from 1967-1982 was as teacher of craft and drawing at Moland secondary school; during this period, he was awarded a state stipend in hymnology (1976). From 1972-1982 Ellingsen was a member of the Lutheran Liturgical commission’s hymnal and chorale book committee. He received a number of awards and recognitions for artistic and literary work, including Brobyggerprisen (1984) and Fritt Ord (Free speech) award (1992); in addition, he received the royal award of Knight of the Order of St. Olav, first class (St. Olavs Orden, Ridder av 1. klasse) in 1995. He holds honorary doctorates in theology from the University of Åbo, Finland (2002) and the Norwegian school of theology (Det teologiske menighetsfakultetet) (2008) and is an honorary life member of the Norwegian hymnological association (2009).

Ellingsen’s hymns are characteristically placed between the spheres of a deep knowledge of the Christian faith and traditions, biblical texts, socio-ethical issues and the universe of human experience. His strengths as a poet are possibly most apparent in addressing sorrow, loss and despair, reflecting the loss of his first child in 1969. These human responses are contrasted with hope and happiness, using modern poetic language that shows strength and rhythmic surety, avoiding flowery metaphors.

Ellingsen made an important contribution to the renewal of language of the church in hymns, intercessions and exegesis. Like many hymn renaissance writers, Ellingsen speaks primarily from the pew rather than the pulpit, weighting a sacramental life as a clear ideal. His grasp on form and rhythm is convincing, so much so that his hymns succeed without rhyming devices. He is widely recognised as the most translated and translatable of the Nordic hymn writers; hymn texts such as Fylt av glede (N13.584) and Noen må våke (N13.738) are included in all recent Nordic collections, and are translated into both German and English. Ellingsen’s texts are found in all Nordic hymnals and most Lutheran hymnals throughout the world, including those of Germany, Austria, Switzerland and USA, as well as more distant language areas such as Mandarin, Sámi and Hungarian. He is also included as the only Norwegian writer in the American publication A panorama of Christian hymnody (2005). He is represented in the current authorised Norwegian hymnals (Norsk salmebok 2013) by 58 texts (of which 15 translations or rewritings). His hymn texts have been mainly set to tunes by Norwegian composers Knut Nystedt (1915-2014), Egil Hovland (1924-2013), Harald Herresthal (1944-), Trond Kverno (1945), Sigvald Tveit (1945-2019) and Harald Gullichsen (1946-).

His contribution to hymn writing in Norway is without peer. We have lost much in his death, but he has given us all treasures for centuries to come. May we express our thanks and honour the life and works of Svein Ellingsen.